NOLAN BREWSTER, 25, safety with Texas, medically retired in September 2011 because of concussions and post-traumatic migraine headaches.  He suffered a severe concussion on 9/17/11 in a game versus UCLA.  Brewster is the son of former Minnesota head coach and Texas assistant Tim Brewster.  “It’s difficult because I love football and playing for Texas, but I know in my heart this is the right thing to do.  I just know I can’t keep playing worrying about this continuing to get worse and knowing that I’m risking my long-term quality of life.”—“Texas’ Nolan Brewster quits football”, ESPN.com 9/26/11, with info from AP used in the report.  (The prior season Texas running back Tre’ Newton gave up football because of recurring concussions.)

PATRICK LARIMORE, 24, middle linebacker with UCLA, medically retired on 8/12/12 because of multiple concussions before what would’ve been his senior season.  He was a team captain in his junior season and was the team’s defensive MVP after leading UCLA in tackles.  He started playing in fifth grade and played at least 11 years, and was once knocked out on a head-to-head hit without helmets in a touch football game.  Larimore was once hit in spring practice at UCLA with such force that he lost feeling in his legs, was rushed to ER, but did not suffer spinal damage.  He sustained at least 6 concussions, at various times experiencing headaches, dizziness, nausea, light sensitivity, and mood disturbance.  He yelled at his parents, Patricia and Bryan, when they tried to dissuade him from playing any longer, his anger stemming from his belief that he could play in the NFL.—“The Decision: The Patrick Larimore Story”, E: 60, Bob Woodruff, 10/30/12.

RYAN SWOPE, 24, wide receiver with Arizona in the NFL and Texas A&M in college, 2009-13, retired because of recurring concussions before he ever played an NFL game.  He had 4 concussions in college, where he played 51 games, and another in off-season training with Arizona.  “…I was advised by doctors that there were serious risks in returning to play football at this point.”—“Ryan Swope, Cards rookie, retires due to concussions”, NFL.com 7/26/13, Gregg Rosenthal.

DAVID ASH, 22, quarterback with Texas, 2013-14, suffered a concussion in the 2014 season opener versus North Texas, in which he took several hard hits, but finished the game before feeling the effects afterward.  Ash missed 10 games last season due to a concussion in a game at BYU, and received a medical redshirt.  Coach Charlie Strong says Ash will be out indefinitely and is worried about the quarterback’s future.—Chicago Tribune 8/30/14.  CBSsports.com 9/8/14, Tom Fornelli.

9/22/14 Update:  After being told by team doctors that if he were their son they wouldn’t let him play, Ash retired from football on 9/22/14.  He experienced headaches for 7 or 8 days after the North Texas game concussion.  He has not disclosed how many concussions he’s had, but has not had memory loss.  “At the core of my heart of hearts, I knew I shouldn’t be playing.  It’s been hard, I’ve met my quota for crying for the next ten years.  I’m not a victim, I’m a victor.”—“David Ash: ‘Awesome days ahead’”, ESPN.com 9/22/14, Max Olson.

The NCAA has reached a deal filed in U.S. District Court in Chicago to toughen return-to-play rules for players who receive head blows and create a $70 million fund to pay for testing current and former players (there’s no cutoff date) to determine whether they suffered brain trauma while playing football and other contact sports.  The lead plaintiff is Adrian Arrington, a former safety at Eastern Illinois, who said he endured 5 concussions while playing, some so severe that he couldn’t recognize his parents afterward.  Unlike a proposed settlement in a similar lawsuit against the NFL, this deal does not set aside any money to pay players who suffered brain trauma.  Instead, athletes can sue individually.  The NCAA admits no wrongdoing in the settlement and has denied understanding the dangers of concussions.  Attorney Jay Edelson called it a “terrible deal” and “window dressing,” saying the NCAA will be able to settle one-off suits for several thousand dollars each and that a single class-action suit could’ve been worth $2 billion to players.—“Accord reached in head-injury suit”, SF Chronicle 7/30/14, from AP with contribution from Chronicle staff writer Tom Fitzgerald.

The NCAA is recommending a regular-season limit of 2 contact practices per week.  This limit is already in place in the Ivy League and Pac-12.  The NCAA also recommends 4 contact practices per week during the preseason and no more than 8 of the 15 sessions during spring football.  Also suggested is that medical decisions regarding players and their return to the field should be made independently of a coach, and should be made by a physician, rather than an athletic trainer.—“NCAA suggests limits for contact practices”, SF Chronicle 7/18/14, from AP.

Adrian Arrington, the former Eastern Illinois football player who started the class-action concussions lawsuit against the NCAA has fired his lawyer, Joseph Siprut, over what he said are weak provisions of a proposed settlement, a claim which Siprut denies.  “The preliminary settlement is completely unacceptable and I never agreed to it,” Arrington told CNN. “In fact, the first time I learned about it was in the media.  I feel that I have been misinformed and the preliminary settlement doesn’t address the reasons I filed the lawsuit in the first place.  I would like the judge to reject the preliminary settlement.  I plan to secure new legal representation to continue this fight to protect future players in NCAA sports.”  Arrington had several concussions when he played football for Eastern Illinois, and told CNN last year that when he complained of memory loss, seizures and headaches, trainers there simply gave him medicine and told him to keep playing.  Arrington quit the team after his father, George Arrington, watched him stumble on the field after a hard hit and coaches were going to put him back in the game.  “I said, ‘Adrian’s not going back into the game.’ ”  “I wake up afraid for my life and I want the lawyers and judges to understand that,” Adrian said.  “I’m mentally unable to provide for my kids — what was the point of getting that scholarship and degree?”  Some cases fall out outside the statute of limitations and athletes involved in those cases will have no legal recourse if the settlement is accepted by a federal judge.  Stanley Doughty is one of those athletes.  He was injured twice–both times going temporarily numb from head and neck injuries–while playing for the University of South Carolina in 2004 and 2005.  He said South Carolina cleared him to play, and it wasn’t until he was signed by the Kansas City Chiefs that he learned from a team doctor that his injuries were actually life threatening, and prevented him from ever playing football again.  The proposed settlement is now before United States District Judge John Z. Lee for consideration.–“Former NCAA football player fires lawyer in class-action concussion lawsuit”, CNN.com 6/10/15. 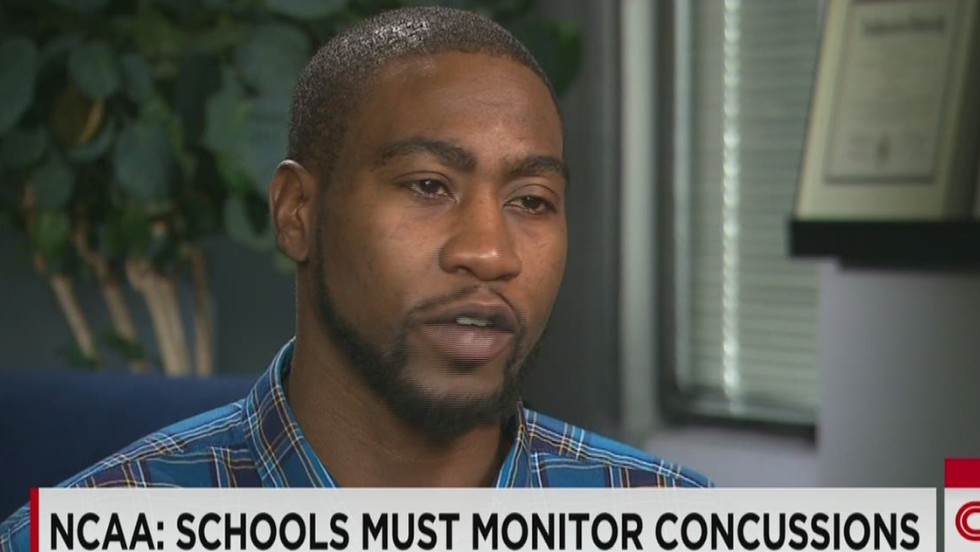 ED REINHARDT JR, 48, tight end with Colorado University, then 19, was tackled by 2 Oregon linebackers after catching a pass in Eugene on 9/15/84, probably receiving a hit to the right side of his head.  He refused help, stumbled to the sideline, was examined for alert signs and found normal, then later complained to a teammate of “bad headaches,” and collapsed with 2 minutes left in the game.  He had emergency brain surgery that night to remove a blood clot on the left side of his brain, a condition with a 90% mortality rate.  His head coach, Bill McCartney, sobbed on hearing his player’s condition, and later led assistant coach Jim Caldwell in prayer as both men knelt in the middle of the hospital hallway and prayed aloud during the surgery.  Reinhardt pulled through, but remained in a coma for 62 days.  He’s paralyzed on his right side, but can walk with a limp and speak in short sentences.  Earlier, during fall practice, he had complained to teammates about headaches, but did not tell the medical staff.  He travels the country with his father, Ed Reinhardt Sr., passing along his inspirational story.—“Classic CU: Reinhardt In Critical Condition”, CUBuffs.com 9/19/09, by Mike Madigan, Rocky Mountain News Staff Writer.  “Former Colorado TE Reinhardt returns to Oregon nearly 3 decades after brain injury”, FOXNEWS.com 10/26/12, from AP.

CHRIS BRYMER, 40, guard at USC 1994-6-7, NFL Europe & Dallas Cowboys practice squad 1999, XFL 2000, while still playing pro football started having trouble sleeping and irrational bouts of anger, acting erratically, partying all night, and exhibiting paranoia.  He accused his wife, Melissa, of sleeping with Troy Aikman and random people, would wake up in the middle of the night and tear the blankets off her and turn on the lights.  He had delusions, thought he was God, and walked on Interstate 5 in southern California parting cars.  Brymer stopped going to work, which led to the collapse of a successful mortgage business he’d founded.  He and Melissa separated in 2005 and in 2010 he was homeless in San Francisco, where he was arrested for hate-crime battery, criminal threatening, and assault.  When Melissa googled CTE she started crying because she knew Chris had it.  “He especially liked using his head.  I have a dented helmet of his.  He used to get really bad headaches.”  She doesn’t want their 10 year-old son near the sport.—“Head Case”, SF Weekly 9/29-10/05/10, Peter Jamison.  “Chris Brymer, Former USC Lineman, Acquitted of Hate Crime Charges”, same SF Weekly & Jamison as above, 11/2/10.

Courts don’t allow CTE as medical evidence because it can’t be confirmed till after death by examination of the deceased’s brain.  Harvard Law School professor and sports-law expert Peter Carafagna was working on a white paper to outline a “dementia defense” that would serve the same function as an insanity defense.  (Same “Head Case” article above.)

SCOTT BALDWIN, 44, running back with University of Nebraska, was shot and paralyzed on 9/5/92 by a police officer as he resisted arrest for disorderly conduct.  Baldwin, who was naked and apparently in the throes of a psychotic episode, had caused a disturbance at a bar and been kicked out, and was spotted by 2 female officers as he tried to enter a home.  During the arrest he tried to pull a gun from one officer’s holster and was shot by the other officer.  He later admitted that he’d stopped taking his medicine and been drinking before the confrontation.  Baldwin had beaten a Lincoln, NE, woman in an unprovoked attacked on 1/18/92, and was found not guilty by reason of insanity and placed in a psychiatric care program.  Baldwin suffered from severe depression and schizo effective disorder.  He was released from court-ordered treatment on 9/2/94 and planned to volunteer at a youth center in Lincoln and look for a job in the youth counseling area.—“Ex-Nebraska Player Shot After Struggle With Police”, LA Times 9/7/92, Gene Wojciechowski.  “Baldwin Out Of Treatment”, philly.com 9/3/94, Daily News Wire Services, The Inquirer.

CULLEN FINNERTY, 30, quarterback with Grand Valley State University (MI), 2003-06, died 5/27/13 in the Michigan wilderness of pneumonia caused by inhaling his vomit following a paranoid episode, which was not his first.  A year and a half earlier, instead of driving home from Detroit he took off for Grand Rapids due to fears the FBI would follow him.  He had been addicted to painkillers, for which he’d spent time in a rehab center.  Stage 2 (of 4) CTE confirmed.  Finnerty led Grand Valley to 3 Division II national titles and was signed by Baltimore (2007) and Denver (2008), but never played in the NFL.  He left behind a wife and 2 children.—“Pneumonia Seen as Star’s Cause of Death”—NY Times 8/8/13, Greg Bishop.  “Former QB’s death linked to brain disease”—Chronicle News Services 8/13.