ERIC PELLY, 18, a football, rugby and hockey player with North Allegheny High School in Pittsburgh, PA, died on 10/10/06 and a post-mortem examination of his brain revealed CTE, Chronic Traumatic Encephalopathy, a degenerative brain disease. Symptoms of the disease in living people include memory loss, impaired judgment, impulse control problems, aggression, depression and dementia—and sometimes paranoia.  (Dementia is a medical condition in which one loses language skills, spatial and thinking abilities, social discretion, and the ability to learn new information.)  Pelly had 3 documented concussions over 3 years (one per season), 2 from football and one from rugby, the last of which caused him to collapse, holding his head and groaning in pain.  He was rushed to the hospital and remained there for 2 days, and was released on the third day with the restriction of “no contact sports for 3 months.”  A week later while sitting down to dinner with his family, Pelly’s body stiffened with clenched fists, his eyes rolled back in his head, and he collapsed while making horrible sounds.  His family performed CPR and he was taken to the hospital and pronounced dead.  His brain had swollen and herniated, cutting off his breathing and heart rate.  It turns out that Pelly had sustained a head injury from a hard hit 2 weeks earlier, of which his parents were unaware.  He’d been removed from a rugby match, given ice to apply to his head, and slept the whole 4.5 hour drive home from Baltimore to Pittsburgh.  He did not tell his parents about the incident, and it was only after his death that Pelly’s teammates revealed it to his parents.—“Eric Pelly”, Sports Legacy Institute, his mother.  “League of Denial”, PBS Frontline 10/8/13, based on the book of the same name by Mark Fainaru-Wada & Steve Fainaru.  “Let’s all pitch in to combat dementia”, SF Chronicle 9/18/14, Dr. Catherine A. Madison.

Watch the following VIDEO from YouTube: Eric Pelly~Rest in Peace

TOM CUTINELLA, 16, linebacker and guard with Shoreham-Wading River (NY), died on 10/1/14 after an on-field collision in a game against John Glenn HS in Elwood, about 43 miles from Manhattan.  The school’s superintendent, Steve Cohen, called it “a freak accident.”  It appears that Cutinella suffered a head injury.  He was able to get up after the third quarter collision but then collapsed.  He was rushed by ambulance to Huntington Hospital, where he died in the intensive care unit after surgery.  Cutinella had been playing football since he was 6 years old.  An average of 12 HS and college football players die every year from football-related accidents, according to a recent study in the American Journal of Sports Medicine.  2 other HS players also had died within that one week period.—“Football death a ‘freak accident’”, ESPN.go.com 10/2/14, Steve Fainaru, AP.

Watch the following VIDEO from ESPN: Football death is 3rd in recent days

DEMARIO HARRIS JR., 17, cornerback with Charles Henderson HS (AL), died on 9/28/14 after collapsing in a game 2 days earlier.  His coach, Brad McCoy, told AL.com that a neurologist told him that Harris suffered a ruptured brain aneurysm, meaning that it’s unlikely that his condition was related to football.  His father, Demario Harris Sr., disputed that diagnosis.  “And contrary to various media reports, my son had a brain hemorrhage, not an aneurysm, that was caused by a hit he took during Friday’s game.”—“Funeral for Charles Henderson football player Demario Harris is set for Saturday”, AL.com 9/30/14, Solomon Crenshaw Jr.

ISAIAH LANGSTON, 17, lineman with Rolesville HS (NC), died on 9/29/14 after collapsing on the field before a 9/26 game.  His older brother, Aijalon, a marine stationed in Maryland, came to WakeMed Hospital on hearing of the collapse, and, while the exact cause of death is not yet known, said it had something to do with a blood clot in Isaiah’s brain.—“ROLESVILLE HIGH SCHOOL FOOTBAL PLAYER DIES AFTER COLLAPSING ON THE FIELD”, ABC11.com 9/29/14, Andrea Blanford.

11/12/14 Update: Langston died from a hit to the back of the head, according to an autopsy as reported by WTVD in Raleigh-Durham.  The medical examiner listed the official cause of death as “complications of vertebral artery dissection due to blunt force injury of the head and neck.”  The report said Langston had a “large posterior circulation stroke…which most likely occurred secondary to vertebral dissection.”—“Autopsy: North Carolina football player died from hit to the head”, USA Today 11/12/14.
Watch the following VIDEO from ABC Eyewitness 11: ROLESVILLE HIGH SCHOOL FOOTBALL PLAYER DIES AFTER COLLAPSING ON FIELD

EVAN RAINES, 16, defensive end with Seventy-First HS (NC), died on 8/3/13 after falling ill at the end of practice, when he informed a coach.  He had complained of chest pains and shortness of breath.  He was treated by emergency medical workers before being transported to Cape Fear Valley Medical Center, where he died.  Raines had passed a physical examination prior to the beginning of practice.  He started playing football when he was 3 and dreamed of playing for Alabama and in the NFL.  He taught bible lessons at the family church.  More than a year later, the North Carolina Medical Examiner’s Office report stated that Raines died of cardiac arrhythmia—an irregular heartbeat—after he collapsed while running wind sprints.  He had no drugs or alcohol in his system and was properly hydrated against the heat index of between 88 and 91 degrees, with 70% humidity.  His heart was slightly enlarged and got its primary blood supply from the right coronary artery, which is not typical.  There were signs his heart had healed from myocarditis, or inflammation of the heart muscle.  The report suggested a genetic heart condition could be to blame, but did not cite specifics.  It also said Raines was diagnosed with hypertension in May 2013 but was not seen by a cardiologist to verify it.  His father, Rodney Raines, disputes this part of the report.  “He was not hypertensive.  They never addressed to us that he had hypertension.”—“Dad: 71st player who died at practice ‘was a jewel to me’”, WNCN.com 8/4/13 (updated 8/19/13), Brandon Herring.  “Report: Seventy-First football player Evan Raines died of irregular heartbeat”, FayObserver.com 8/27/14, Earl Vaughn Jr.

Watch the following VIDEO from WNCN:  Dad: 71st player who died at practice ‘was a jewel to me’

ATLAS FRALEY, 17, lineman with Chapel Hill HS, died at home alone on 8/12/08 after a scrimmage and complaining of a headache and cramping.  He called 911 and said he was sore all over his body and needed an IV.  He was treated by emergency medical services at his home but not taken to the hospital.  His parents, Malinda and David Fraley, later found him dead.  Fraley had collapsed from dehydration after a football practice in 2007 and required emergency medical treatment.  A lawsuit filed against the school district claims that David Fraley spoke to Coach Isaac Marsh about the 2007 incident and the need for fluids for his son during practice and was assured by Marsh that fluids would be made available.  But on the day of Atlas’s death, the suit claims, no fluids were available, that Atlas was in obvious distress and lay down on the ground, but that Marsh did not call for medical help.—“Autopsy: Player died of natural causes”, ABClocal.go.com 3/19/09, WTVD-TV/DT, Tamara Gibbs.  “School system wants monetary information for Fraleys’ lawsuit”, HeraldSun.com 12/28/12, Beth Velliquette.

JOSEPH CHERNACH, 25, all-state defensive back with Forest Park HS (WI), died on 6/6/12 after suffering from depression and was found to have Stage II, possibly Stage III CTE (with Stage IV being the most severe).  He was an honor student, an Upper Peninsula wrestling and pole vault champion who later attended Central Michigan University and worked for Black River Falls School District.  He played Pop Warner, junior varsity and varsity football.  “Joseph never played college or pro-sports and we do not know of any concussions during his middle or high school years,” said his mother, Debra Pyka.  Dr. Ann McKee’s report noted “numerous tau neurofibrillary tangles in the locus coeruleus, an area of the brain thought to play a role in mood regulation and depression.  The changes in the frontal lobes and locus coeruleus were the most severe I’ve seen in a person this age.”—“JOSEPH CHERNACH”, sportslegacy.org, Debra Pyka, his mother (2/21/14 press release from the Sports Legacy Institute).  IronMountainDailyNews.com 6/11/12, obituary.

2/6/15 Chernach Update: Joseph Chernach’s mother, Debra Pyka, has filed a $5 million wrongful death lawsuit against Pop Warner youth football, claiming dementia and deep despair caused by brain injuries he suffered while playing youth football influenced his suicide. Chernach hanged himself in his mother’s shed in Hixton, WI, on 6/6/12. The lawsuit says he suffered from CTE that originated in Pop Warner Football when he was 11, playing 4 years (1997-2000), and that Chernach, other children and parents were not warned about the dangers of playing tackle football. It also alleges Pop Warner Football is an “ultrahazardous activity” that is intrinsically dangerous to children. The suit says the effects of the diseases began to affect him in his sophomore year of college, when his behavior became increasingly bizarre, as he became progressively depressed and ultimately paranoid, distrusting his close friends and family. He stopped going to class, would sleep all day and be up at night. Pyka’s lawyer, Gordon Johnson, said they think there have been hundreds of other suicides in which autopsies, had they been done, would have pointed the finger at youth football.—“Pop Warner youth football blamed for Wisconsin man’s suicide”, FoxNews.com 2/6/15, AP.

KORT BRECKENRIDGE, 25, co-captain linebacker with Teton Valley High School (ID), nearly died after making a routine tackle in a senior night game on 10/7/05.  He sustained a concussion on the play and was the victim of Second Impact Syndrome (SIS), a condition where someone sustains a second concussion before the symptoms of a previous concussion have cleared up.  He had had a concussion a month before.  In Breckenridge’s case, not unusual, he had hidden multiple previous concussions, which caused vomiting.  Each successive concussion sustained makes a person more susceptible to the next.  The brain reaches a state where it cannot auto-regulate its blood flow.  His brain had such severe swelling that his right hemisphere was removed and he was put into a medically induced coma.  He survived but tires easily, has very poor short term memory, slurred speech, and walks with a limp.—New York Times video 9/15/07, by Matthew Orr and Alan Schwarz, contained within an article on MIKE BORICH, “Concussion Trauma Risk Seen in Amateur Athlete”, NY Times 10/21/09, Alan Schwarz.  (Borich was a Western Illinois wide receiver who died at 42 of a drug overdose after a downward spiral of depression, and had CTE.) 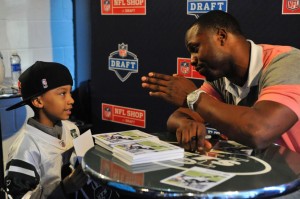 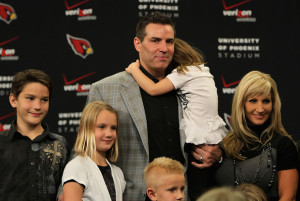 Former Arizona Cardinals quarterback Kurt Warner said he wants his sons to avoid the game that made him rich and  famous. “Is football’s pocket collapsing?” Chicago Tribune 9/9/12, Steve Chapman.